The UFC fighter recently announced his retirement from the ring, and is using his free time to pursue cannabis and fitness opportunities. 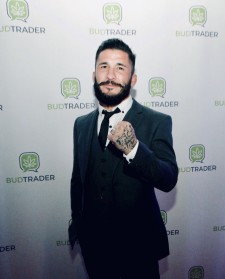 SANTA MONICA, Calif., October 25, 2018 (Newswire.com) - BudTrader.com, the largest online cannabis marketplace, is proud to announce the addition of MMA legend Ian “Uncle Creepy” McCall to its Advisory Board. McCall was already an investor in the company. The former UFC fighter recently announced his retirement from the ring, and is using his free time to pursue cannabis and fitness opportunities and philanthropic causes.

“I have been a cannabis patient and advocate for some time, even before it was popular to admit it,” says McCall about his decision to invest and come on board at BudTrader. “Cannabis is going to grow into a 100 billion dollar industry, and I want to get in on the green rush.”

BudTrader is going to not only be the biggest cannabis platform, but the biggest social media platform too. Watch out Facebook, we're coming for your title!

“BudTrader helps cannabis business owners connect and make money but they’re also trying to make the world a better place,” McCall continued. “I believe Brad (McLaughlin, CEO of BudTrader) and BudTrader are going to save the world. BudTrader is going to not only be the biggest cannabis platform, but the biggest social media platform too. Watch out Facebook, we’re coming for your title!”

BudTrader CEO Brad McLaughlin had this to say: “Ian is one of the greatest MMA fighters of all time, and he’s an even better businessman. Having him on our Advisory Board is a huge addition, and we are expecting very big things from him.”

BudTrader.com is the largest online cannabis marketplace. Its platform is available in the United States where cannabis use is legal, as well as Canada and Puerto Rico. BudTrader’s two-million registered users can safely and legally post and reply to classifieds-style ads for cannabis products, services, jobs, equipment and more.