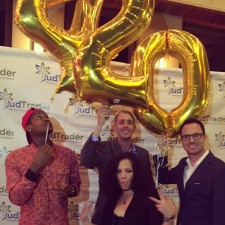 ENCINITAS, Calif., August 23, 2017 (Newswire.com) - BudTrader.com, the world's largest online medical marijuana marketplace, announces that rapper Slim 400 is the latest celebrity to become an investor in the site. Slim 400, who is based out of Compton and is currently on tour with platinum artists YG and Kendrick Lamar, has invested an undisclosed amount into BudTrader's online platform, which allows users to post free, classified ads for cannabis products, services, jobs, etc. "I'm not just a rapper, I'm also a businessman. BudTrader is a great investment opportunity. It's the biggest weed website in the world at a time when weed is finally becoming legal. It's a no-brainer," says Slim 400.

"Slim is an extremely talented guy and a very sharp business man," says BudTrader.com CEO Brad McLaughlin. "Slim is definitely a value added investor with great ideas. There is so much synergy between hip hop and the cannabis community."

Slim is definitely a value added investor with great ideas. There is so much synergy between hip hop and the cannabis community.

His recent decision to invest in BudTrader is not the first time Slim 400 has shown public support for the brand. He has made several appearances at BudTrader parties and events in 2017, including the first annual 'BudTrader Ball' (held on 4/20, a traditional "marijuana holiday"). In his recent music video for his track "Spanish (Remix)" ft. Berner and R-1 La Esencia, the rapper mentioned BudTrader in a verse, and can be seen sporting the brand's logo on his t-shirt.

In addition to his investment in BudTrader.com, Slim 400 has recently launched his own line of cannabis vape cartridges called 24 Karat, which is being sold in dispensaries across the state of California. It features a 24K gold tip and boasts a 90% THC level.

Slim 400 joins a long list of other high-profile investors and advisors who are now backing BudTrader.com, including Doug Leighton, a hedge fund manager from Duchess Capital who took cannabis app MassRoots public; Grant Koeneke, former CTO of Weedmaps and Jim Skelton, former CEO of Ocean Pacific and Fredericks of Hollywood.

In addition to being the world's largest online medical marijuana marketplace, BudTrader has launched its own network of original content shows, all related to cannabis and the legal weed industry, called BudTrader TV, and is currently in production on a reality TV show based on the day-to-day operations at the brand's headquarters in Encinitas, California.