Medical Marijuana Marketplace BudTrader.com Sets a New Tone for 4/20 With Their BudTrader Ball

The BudTrader Ball is a Classy, Red Carpet Event That Aims to Become "The Academy Awards of Weed" 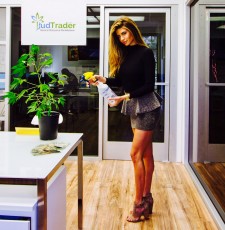 San Diego, California, April 19, 2017 (Newswire.com) - The nation’s largest online medical marijuana marketplace, BudTrader.com, will be throwing a formal gala in their home base city of Encinitas, CA on Thursday to celebrate 4/20, a traditional holiday for weed smokers worldwide. With their first annual invite-only BudTrader Ball, the company seeks to set a new stereotype for the legal weed industry by celebrating April 20th in a high style. The BudTrader Ball will be held at SHELTER, a popular, upscale club in the trendy, beach-adjacent downtown area of Encinitas.

“People at Cannabis trade shows and online kept asking ‘What is BudTrader going to do for 4/20?’ We knew we had to do something awesome and we wanted to do something different,” said BudTrader.com CEO Brad McLaughlin. “We finally came up with the idea to have a classy, red carpet event, with a strict dress code and invite leaders in the marijuana industry, influential members of society and entertainment as well as politicians. The way we kept describing the event internally was ‘The Academy Awards for Weed’, that was kind of the vibe we were going for.”

"The Governor's office wanted more information on the event, the guests, the environment etc. I pushed very hard for him to attend, and I think I made a great pitch as to why he should be there. As of today, he hasn't said yes, but he also hasn't said no. My gut tells me he's going to come. I think he wants to come to show his support to the legal marijuana industry."

As part of their effort to put a new, more mature face on the legal weed industry, BudTrader has sent official letters of invitation to high ranking politicians such as President Trump and California Governor Jerry Brown. In fact, McLaughlin says, "Governor Brown’s office has been actively corresponding with him regarding a possible appearance at the BudTrader Ball. The Governor’s office wanted more information on the event, the guests, the environment etc. I pushed very hard for him to attend, and I think I made a great pitch as to why he should be there. As of today, he hasn't said yes, but he also hasn't said no. My gut tells me he's going to come. I think he wants to come to show his support to the legal marijuana industry.”

In addition to potential Jerry Brown sightings at SHELTER in Encinitas, other VIP guests who are slated to attend the BudTrader Ball include Doug Leighton, a huge participant in the cannabis industry, whose success include MassRoots and American Cannabis, several venture capitalists and hedge fund managers who will be flying in from all over the U.S. and Canada, as well as many other leaders in the cannabis industry, including dispensary owners and medical marijuana doctors. Over 40 different media outlets will be in attendance. Influential members of society including MMA athletes, current and former NFL athletes, Olympic Athletes will all be attending, along with stars and producers from a currently filming reality TV show, and new hip-hop sensation Slim 400.

As for what else the 250 attendees of the BudTrader Ball can expect, McLaughlin says, “We do have a few surprises and tricks up our sleeve for this event. We will be airing a sneak peak of BudTrader’s first TV commercial.  There will be a ‘special guest’ musical performance, a major politician will be calling in on a video Skype call as well. Those are the only hints we're giving out at this time… Come and see what happens. I can tell you that people are going to be blown away, that’s the whole idea!”

As a brand, BudTrader.com is no stranger to making a scene. Most recently, they deployed a team of supermodels to the convention hall floor at the Cannabis Business Expo in San Diego to give away over 10,000 free blunts to attendees – Calling the flash mob-style event ‘Blunts & Babes’. BudTrader.com has over 600,000 registered users and gets 6,000,000 visitors a month, making it the largest medical marijuana marketplace in the world.

More information about the BudTrader Ball can be found on the official event website: BudTraderPromo.com

The event begins at 8 p.m. and goes to 1 a.m. at Shelter Night Club located at:

The dress code is "dress to impress" and will be strictly enforced. There will be appetizers, open bar, networking and dancing. All attendees will leave with a complimentary swag bag filled with marijuana goodies.