Hundreds of Volunteers Pitch in to Collect '420' Pounds of Trash at BudTrader.com Beach Cleanup

Hundreds of Volunteers from the Legal Marijuana Industry Collect '420' Pounds of Trash at BudTrader.com Beach Cleanup in San Diego, CA 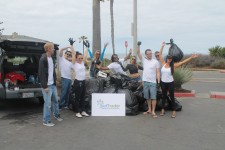 San Diego, California, June 7, 2017 (Newswire.com) - In the lovely beachside town of Encinitas, California, 150 professionals from the legal cannabis community dedicated their mornings to helping the environment, at an event sponsored by online medical marijuana marketplace BudTrader.com. During this 4-hour event, volunteers cleaned up approximately 400 to 500 pounds of garbage and other pollutants from the beaches and waterways of Encinitas in San Diego County, including the scenic Moonlight Beach area.

"The representative from 1-800-GOT-JUNK estimated that the trash we collected was between four hundred and five hundred pounds,” BudTrader.com CEO Brad McLaughlin explained. “Now, I’m not a mathematician, so I’m going to estimate on the low end and say that the BudTrader.com Beach Cleanup removed approximately 420 pounds of trash.”

"The representative from 1-800-GOT-JUNK estimated that the trash we collected was between four hundred and five hundred pounds. Now, I'm not a mathematician, so I'm going to estimate on the low end and say that the BudTrader.com Beach Cleanup removed approximately 420 pounds of trash."

The family-friendly event brought together volunteers from the community and beyond,  individuals coming down from Los Angeles and Orange Country to lend a hand. Also in attendance were BudTrader.com CEO Brad McLaughlin and his team, along with the site’s promo models, the BudTrader Babes.

BudTrader.com is the largest online medical marijuana marketplace, and is headquartered in Encinitas. McLaughlin says he wants to use the growing influence of BudTrader to help the environment. “I care a lot about the environment. Our campus is located right by the beach, and a lot of us surf and spend time on the beach. At BudTrader, we are all about ‘going green,’ and now we are going to take that to the next level!”

“What an awesome way to kick off Memorial Day weekend!” said BudTrader Babe Solmayra (@solmayra88), a model and fitness expert who was among the volunteers at today’s BudTrader.com Beach Cleanup. “It feels great knowing we made the beaches of our San Diego just a little more clean and beautiful today.”

BudTrader.com is now the largest online medical marijuana marketplace, and is growing rapidly. The site now receives seven million monthly page views and has 850,000 registered users, who can post and reply to ads for cannabis products, services, real estate, investment and job opportunities, and more. BudTrader.com’s rising profile in the online cannabis industry has led to their recent acquisition of mmjbuy.com, and the company is also currently filming a reality TV show centered around the day-to-day operations of the brand.

In addition to their work with the local environment, BudTrader.com has focused on advocating for safe access to medical marijuana across the country. In April, the site sponsored a survey of 150 current and former NFL players which showed that 87% wanted the league to remove its restriction on medical marijuana. These findings sparked controversy and conversation in the sports world, and received coverage in publications like High Times Magazine.