Former California Congressman Dana Rohrabacher has announced via a twitter post that he has joined the BudTrader.com advisory board. 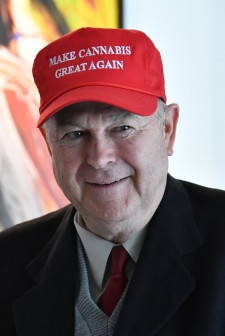 SAN DIEGO, May 29, 2019 (Newswire.com) - ​​​​Former California Congressman Dana Rohrabacher has announced via a twitter post that he has joined the BudTrader.com advisory board .“I'm proud to announce I've joined https://BudTrader.com  as a shareholder and advisory board member, so I may continue the fight for cannabis legalization on a national level.” tweeted former Congressman Rohrabacher.

In 2014, the Congressman introduced the Rohrabacher–Farr amendment, which has been credited with allowing cannabis businesses to operate without fear of federal law enforcement interference. Through Rohrabacher’s strong leadership and guidance, the bill passed with bipartisan approval.

“The Rohrabacher–Farr amendment has been a revolutionary, turning point in cannabis history that gave birth to this whole new billion dollar industry and national movement towards legal cannabis,” said BudTrader CEO Brad McLaughlin. “Without Dana and the Rohrabacher-Farr amendment, the legal cannabis market would not exist as it does now. The entire cannabis industry owe's Dana a great debt.”

In September of 2018, McLaughlin traveled to Washington D.C. to meet with then-Congressman Rohrabacher and other members of Congress to discuss cannabis and hemp  reform. McLaughlin even joined Rohrabacher at a private event at the Trump Hotel, attended by President Trump.

“I received a call from Congressman Rohrabacher,” says McLaughlin. “He told me, I need to come to Washington, D.C. — and that my country needs me. I was on the first flight to Washington DC,” McLaughlin said. “Dana is a passionate and dedicated cannabis advocate. So when I told him  that BudTrader and the cannabis community needed him, Dana was gracious enough to agree. I am proud to have such a prestigious figure as Congressman Rohrabacher on BudTrader’s Board.”

BudTrader.com is the largest online cannabis social media site. Its platform is available in the United States where cannabis use is legal, as well as Canada and Puerto Rico. BudTrader’s two-million registered users can safely and legally post and reply to classifieds-style ads for cannabis products, services, jobs, equipment and more.