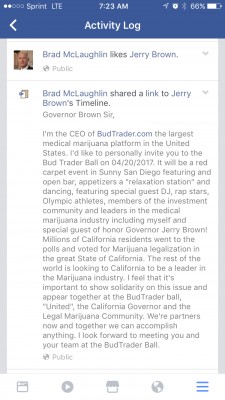 Sacramento, CA, March 29, 2017 (Newswire.com) - ​​​​Governor Jerry Brown may have to clear his schedule on April 20th… BudTrader.com CEO Brad McLaughlin has posted an official invite to the BudTrader Ball on 4/20, along with an impassioned statement, to the governor’s Facebook Timeline this morning, in what appears to be an effort to bridge the chasm that has previously existed between the Medical Marijuana Industry and those at the highest levels of government. McLaughlin a de facto spokesman for the Legal Marijuana Community in California in recent months, and his site, BudTrader.com,  and it’s 600,000 registered users is the largest medical marijuana platform in the United States.

In the Facebook post, which has already been shared hundreds of times by amused onlookers on social media, McLaughlin invites Governor Brown to attend BudTrader.com’s annual invite-only 420 gala – the BudTrader Ball, taking place April 20th in San Diego County in Encinitas – as the guest of honor. “The rest of the Country is watching and looking for California to be a leader in the Marijuana industry,” wrote McLaughlin in his message, sent from his personal account, to Governor Brown. “I feel that it’s important to appear together at the BudTrader ball, United, the California Governor and the Legal Marijuana Community.”

While some would consider the Governor’s attendance at a pro-Marijuana Industry event to be controversial, McLaughlin does not see it that way. “I think it would be more controversial if Governor Brown chose not to show solidarity with the Legal Marijuana Community at this time. The voters of California have spoken – We are ready to move ahead and the industry is growing exponentially and will continue to grow.” McLaughlin is referring to Proposition 64, passed by California voters in November, which legalizes marijuana for persons ages 21 years or older under state law and establishes taxes on both sales and cultivation. “California is the sixth largest economy in the world, but our state is $456 billion in debt. We’ve seen the tax benefits in Colorado – Marijuana legalization in that state brought in over $2.4 billion into the state’s economy after just six months. We need the funds for our crumbling infrastructure and our schools. California CAN NOT afford not to embrace Marijuana Legalization. Governor Brown is a very intelligent business man who I happen to admire very much, and I really hope he will join us at the BudTrader Ball to prove he is ready to Stand United with leaders in the Marijuana Industry.”

San Diego, California based site BudTrader.com is a brand that knows how to generate buzz. Most recently, they deployed a team of supermodels to the convention hall floor at the Cannabis Business Expo in San Diego to give away over 10,000 joints to attendees – Calling the flash mob-style event “Blunts & Babes”.  Given the brand’s rather provocative publicity strategies, some on social media wonder whether this invite to the governor is for real. McLaughlin assures us that it is. “This is a real invitation and I absolutely meant every word of my message to Governor Brown. I am sincerely hoping that he will accept, our partners at Jet Blue are willing to fly the Governor and his team from Sacramento to San Diego, SD Limo Services have agreed to dispatch two stretch limousines to meet Governor Brown and his team at the airport and bring them to the BudTrader Ball. The governor will not be the only VIP at the BudTrader Ball – but we will definitely pull out all the stops for him!”

When we contacted Governor Brown’s office they seemed generally amused and curious by the invitation, but would not offer an official comment on whether the Governor planned to attend the BudTrader Ball.